Herend or officially the Herend Porcelain Manufactory or Herendi PorcelĂˇnmanufaktĂşra Zrt. is founded in Hungary in 1826 by Vince Stingl. The Herend factory mainly makes pottery and goes bankrupt after a few years. Lender MĂłr Fischer takes over the company and starts with making classic models so that the classic tableware sets where pieces are missing can be supplemented. This makes royal houses from around the world customers of Herend and they also sell new tableware to these customers. With the economic crisis in 1874, the business is low and when the sons of the owner take over the business, things are not improving. The quality of the Herend products is low and the factory is sold a couple of times. When the founder's grandson eventually buys Herend, he starts by making more sculptures with designers, this in addition to the tableware. The quality of the Herend porcelain is better again but sales are stagnant, the company is mainly dependent on foreign lenders. After nationalization by the Hungarian government, Herend has quite a bit of freedom to make porcelain, the government likes to get much foreign money into the country. After the Iron Curtain falls, Herend again becomes an independent company where most of the shares are in the hands of the employees. Well-known designers of Herend include BĂ©la Markup, Elek Lux, JĂłzsef Gondos, Gyula Maugsch, IstvĂˇn LĹ‘rincz, IstvĂˇn SzilĂˇgyi Nagy, GyĂ¶rgy Vastagh en Eva Vastagh. At antique auctions you can often find Herend porcelain, sometimes the dinnerware, sometimes a nice figurine.
- advertisement -

These are all Herend lots that we have found at the auction houses we are currently working with. We have been looking for a matching description so sometimes you might find more interesting lots when you use an alternative or less exact description.Use the search function to find other interesting upcoming auction lots. 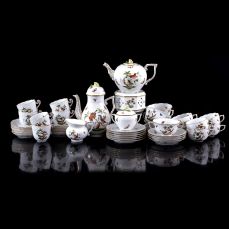 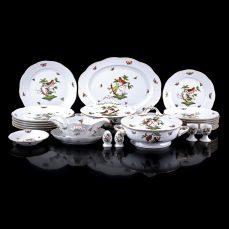 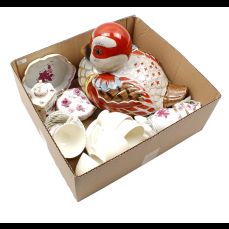 These are some of the Herend lots that are sold in previous auctions. Herend - Birds on the branch